∞ Vintage in its Prime:Vintage industrial chic at its... 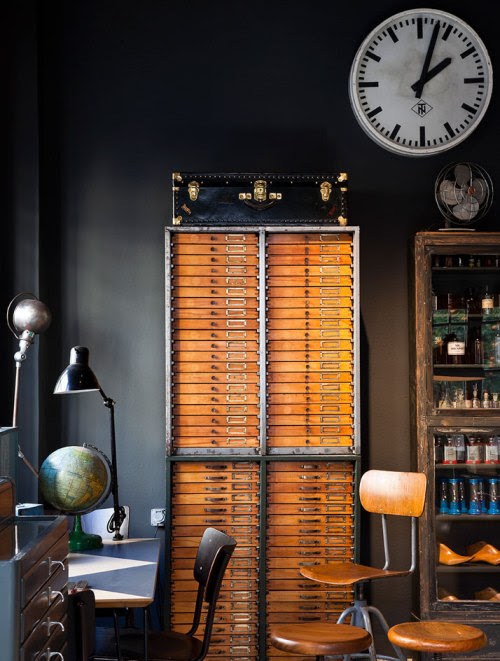 ∞ Vintage in its Prime:

Vintage industrial chic at its finest! 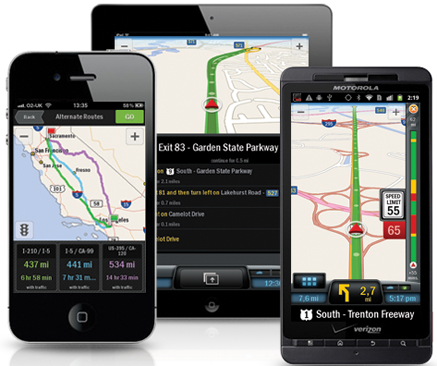 ALK Technologies announced that later this spring their CoPilot GPS app will be available as a free download for iPhone, iPad and Android devices. And we’re not talking about some basic app here — rather, the free CoPilot app will provide offline maps, millions of points of interest preinstalled, route planning with multi-stop trip optimizer, alternate routes support, driving directions, walking mode, social sharing and local content.

Of course, certain parts of the app won’t be free. Users looking to get additional features — including full voice-guided, turn-by-turn navigation, 3D map views, speed limit warnings and realistic ClearTurn display — will be able to upgrade at any time for $19.99 for lifetime use. In addition, there’s the ActiveTraffic option that for $9.99 for a 12-month subscription brings real-time traffic service that scans your route for delays and automatically provides a faster route if available.

We love to see market forces (i.e. Google and Nokia) working their magic, delivering goods that used to cost something for free.

My grandfather’s partner desk from the...: 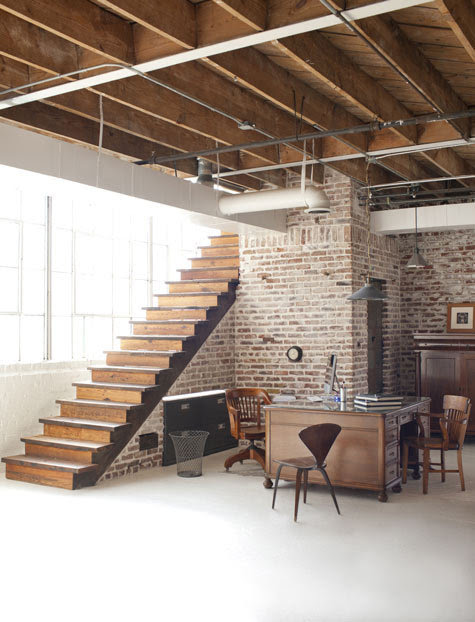 My grandfather’s partner desk from the 1930s. Each drawer is filled with old family photos, leases, letters, contracts, deeds, stock certificates and items from as far back as the 1850s. Eyeglasses, ballet shoes, letter sweaters, bibles, coins, ribbons of political buttons, old letterhead, ledgers, lighters and a multitude of other family “treasures.” I love the stairway to our loft — I guess there were not many building codes in the 1920s.

An old writing desk Jamie and I bought...: 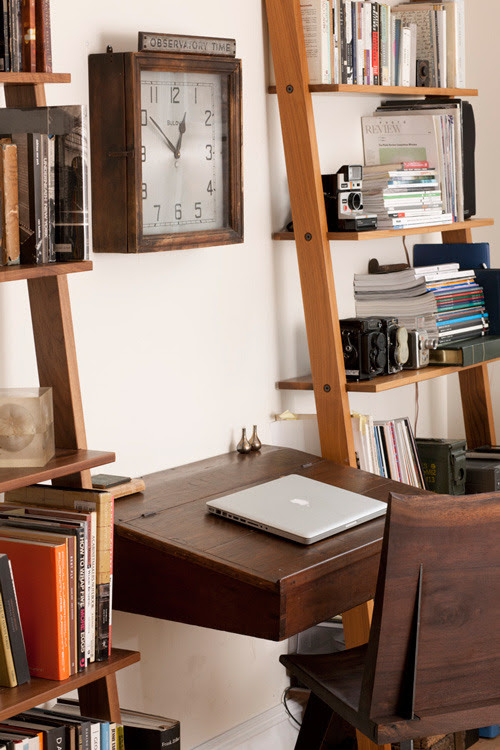 An old writing desk Jamie and I bought in Brimfield, MA. It was beautifully crafted but had no base. Instead of building legs, we mounted it to the wall, allowing the desk to float. In the foreground is a prototype of a chair I’m currently working on in my shop. It’s a series of chairs built from a single slab with steel hardware. On the shelf is a (small) portion of Jamie’s vast camera collection.

Another lovely image from the Design Sponge article on Asher Israelow and Jamie Goldenberg. 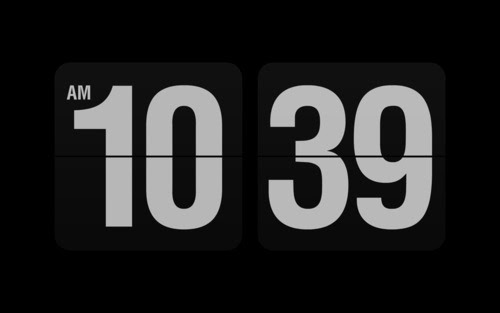 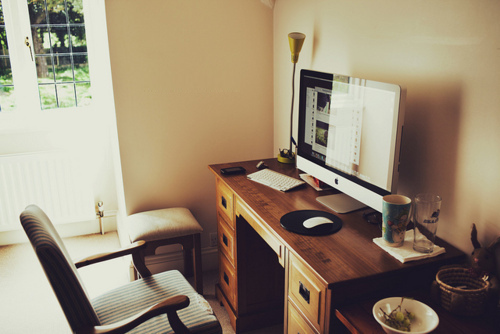 Samsung offers free apps to bada and Android users for the Valentine’s Day:

Samsung is using Valentine’s Day to share some love, offering a number of apps and games for free to its bada and Android users. At the same time, the Korean company wants to promote its own app store, Samsung Apps, since that’s the place you’ll have to visit in order to take advantage of this deal.

The scheme lasts till February 21st and will also see many other apps (which are not free) offered with a discount.

Additionally, heavy downloaders will be able to win a $5 app voucher in case they download all free apps. Neat incentive, don’t you think?

Anyway, you should tap the Samsung Apps icon on your Samsung smartphone to check out what’s available for free. Alternatively, you can browse the store from web at samsungapps.com. 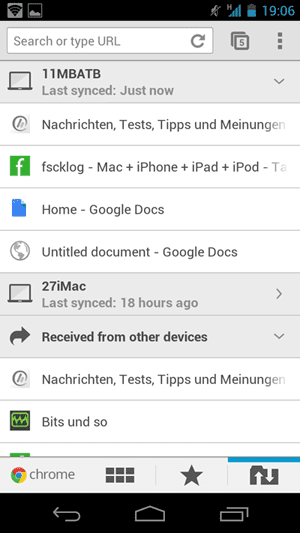 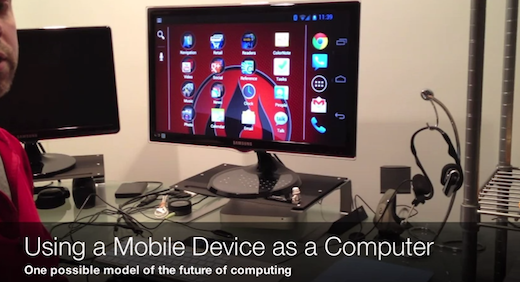 Have you ever come across a feature that stops you operating your device in a manner you would prefer? You are required to ignore it or take extra steps to avoid it; perhaps it exists as a mechanism to enhance marketing or company reputation. This is called an ‘Anti-feature’.

Anti-features are features deliberately added to a design to reduce the functionality of a hardware or software system.

An anti-feature is not a bug. A bug is a software design fault, caused by complacency, oversights or a misunderstanding of the design specification. Anti-features are a subset of features, they are documented functionality.

Most of the anti-features listed below are implemented by manufacturers rather than Google. That said, they are common to Android handsets regardless of the brand, hence the title.

Kicking off with the most subjective anti-feature on this list, Android has never supported external GPS devices and Google are happy to keep it that way. Their documentation on Location Services states ‘external GPS receivers are unsupported for use with Google Maps for mobile at this time’. Internal GPS receivers are accurate enough for road navigation at best. Activities such as mountain climbing, geocaching and hiking require a strong GPS signal that isn’t assisted by network triangulation or Wi-Fi. In recent months, several patches adding support for external GPS modules have been submitted to Google for review, I wonder if any are accepted.

There are plenty of apps on the Market to provide external GPS Support via Bluetooth.

In 2008, when Android was in development, a member of the design team came up with an idea, ‘why not automatically convert SMS to MMS when they are too long’? Monthly price-plans offering unlimited SMS were uncommon and prepaid users had to fork out a princely 4 to 20 pence per message. It was a good idea at the time and it saved users money.

In 2012, price-plans offering unlimited SMS are everywhere and many users now see it as a form of instant messaging. Users don’t need their phone to automatically convert long SMS messages anymore, however a quick search of the Internet reveals plenty who can’t escape the problem.

Google implemented a patch in Android 2.2 Froyo (2010) giving users a choice to enable or disable the automatic conversion. The patch seemingly got lost on the way to every major manufacturer including HTC, Samsung and Sony. They even omitted it from major updates like 2.3 Gingerbread. This feature hasn’t been useful for years yet manufacturers and networks insist on including it without a method of disabling it. Why? If you have 5000 free SMS and 0 free MMS, who benefits from converting your free SMS messages to a paid MMS?

Although this isn’t confirmed, I have spoken to several Galaxy Nexus users who suggest this feature is present in Ice Cream Sandwich.

The quickest solution is downloading a free app I maintain called BigSMS. It provides you with a simple front-end to send SMS messages of almost unlimited length. It’s compatible with the standard Android Messaging System, supports delivery reports and has a tiny footprint. If you want to replace the stock messaging app entirely, check out Handcent or Go SMS.

Alternatively, you can root your device and modify the Messaging APK. It’s quite a tough job and varies depending on the device you use but there are plenty of tutorials on the Internet.

This would be number one if there were no ways around it. A growing number of manufacturers have started replacing the standard Android Market with device specific alternatives. Hannspree’s Hannspad and Barnes & Noble’s Nook Tablet are two popular Tablet devices shipped without the Android Market. Instead, they are sold with specialist App Centres offering a limited number of apps most of which are supplied by affiliate companies. There tends to be a greater number of paid apps and sealing off users from the official Android Market results in a disappointing user experience.

Alternative app sources cause unnecessary fragmentation due to inconsistent updates, erratic technical support and different price structures. Branded App Centre’s destroy the centralized nature of mobile app distribution. In laymen’s terms, two or more app sources have to be maintained otherwise a mismatch in versioning and functionality will occur. While standalone apps are probably safe those connecting to servers or other devices will function improperly; if one source isn’t updated on time, a whole user base will suffer.

You can search the Android Market via the Browser and download the APK manually .

Another solution is to install a modified version of the Market from the Internet. A quick Google Search for ‘tablet install market‘ yields hundreds of results. There are some that don’t require you to root your device.

A more desirable way is to root your device and install the full Market. This should enable you to receive important updates to the Market app, something you might not get with a modified version.

The hardcore solution is flash a custom ROM. Custom ROM’s will have the Android Market integrated by default. You’ll get all the benefits of the Market and probably enjoy several performance enhancements. You’ll need to install ClockWorkMod recovery for this.

Android devices are regularly advertised as free and open. Customization is encouraged and as a user, you control the phone, not the other way round. It’s blissful… Unsurprisingly, the utopia Google envisioned didn’t quite match that of major manufacturers who promptly locked down their devices and developed new ways to prevent any kind of modification. To genuinely customize a device, you need root access.

Simple protection is expected but some devices are almost impossible to root. Bootloader protection, updates to reverse root procedures and heavily restricted permissions all stink of some totalitarian regime where users operate the device in a manner satisfying the manufacturer.

Research your device. See if the bootloader can be unlocked via an official (or unofficial) method. HTC have just announced a large number of their phones can now be unlocked via their website for free. Better yet, check the ease in which a device can be rooted before you buy it.

Bloatware installed as System Apps was always going to be top of the list and you knew it. What do most people do when they buy a new PC? Uninstall the unnecessary OEM software that is included. That’s not possible on many Android devices as manufacturers (and networks) include bloatware as System apps. Without root access, bloatware installed as a System App cannot be removed from an Android device. What makes it worse is quite a large number of bloatware apps require you to pay a fee to use them. You can’t remove them and you can’t use them unless you pay…

There is only one, root your phone. User apps are sandboxed preventing you from modifying internal data… such as system apps.

The definition of Anti-feature is open to interpretation as many consider the term anti-feature to be subjective. What exactly constitutes an anti-feature?

In my opinion, an obvious example of an anti-feature is Microsoft’s original Zune blocking content that didn’t use Microsoft’s DRM (Digital Rights Management). It was a feature, but it didn’t benefit the majority of users and was included as a marketing ploy. Therefore, it was an anti-feature. Yet, some will look you straight in the face and tell you it was useful, important, ‘maintained stability’ etc.

A more ambiguous example is this:

Konica Minolta Laser Printers prevent users installing imitation toner cartridges by checking a microchip that verifies it’s a legitimate replacement. As a secondary function, the chip also monitors the levels of toner within the cartridge. When the cartridge is empty, the chip expires forcing the user into purchasing a replacement. You cannot reuse the cartridge by refilling as the microchip has expired and this process is irreversible.

The example above is tricky. You can understand why Konica Minolta want to block users installing imitation cartridges but is it necessary for the chip to expire? I’ll leave that up to you.

PON is a touted as the strongest, most versatile smartphone mount

PON is a touted as the strongest, most versatile smartphone mount: 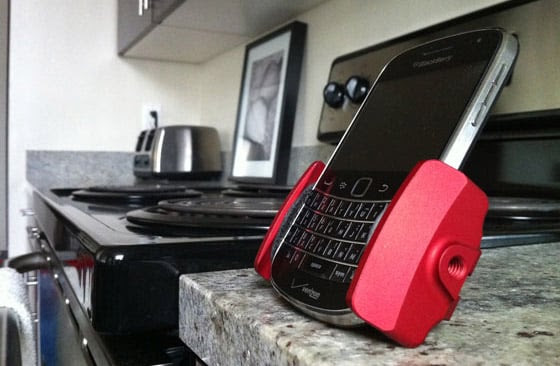 Like to support new product development? Need a smartphone mount? Check out the PON, one of the projects at Kickstarter, created with a mission to provide the “strongest, most versatile mounting system to harness the full potential of smartphone technology in all applications of everyday life.”